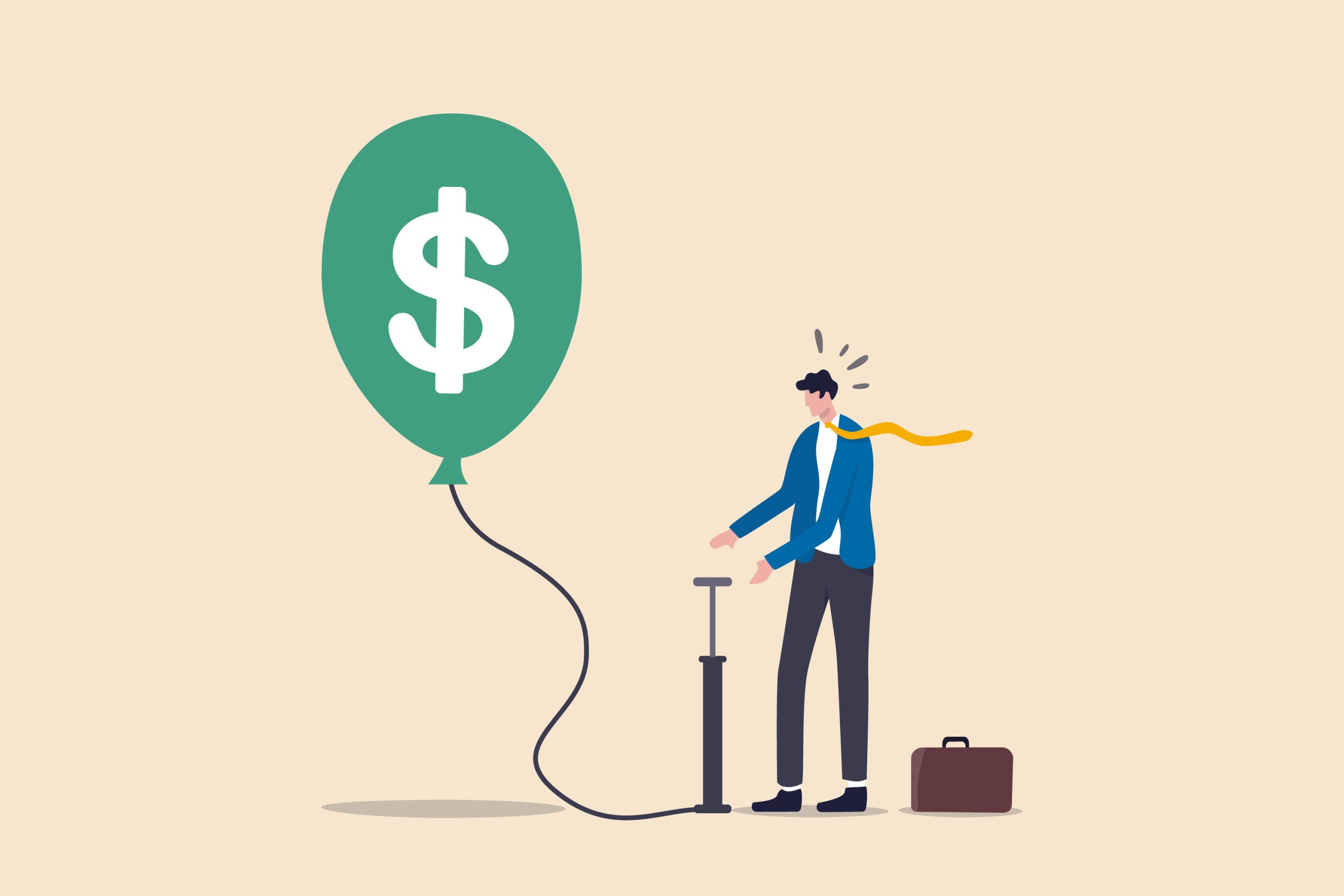 To most people, inflation is a dirty word. It brings to mind skyrocketing prices for groceries, fuel, and other essentials. Believe it or not, though, some people do benefit from inflation. Keep reading to learn more about who benefits from inflation and how they do it.

In this article show
What is inflation?
Is inflation a bad thing?
Who benefits from inflation?
Businesses with fixed-rate debt
Individuals with fixed-rate low-interest debt
Commodity investors
Value investors
Real estate investors
In-demand workers looking for new jobs
Who loses due to inflation?
People who keep their life savings in traditional savings accounts
Workers with frozen wages
Borrowers with variable interest rates
Companies exporting goods to countries with lower inflation rates
Should you change your financial strategy in response to inflation?
Consult a financial advisor
Maintain a diversified portfolio of assets
Find the right mix of cash savings and investments

The International Monetary Fund describes inflation as an economy-wide increase in the cost of goods and services. In plain terms, it’s why a dollar buys so much less today than it did decades ago.

Economists typically monitor inflation by tracking prices for commonly-purchased goods and services, such as food, housing, and energy. This results in an approximate measure of how much more expensive life has gotten for the average person within a specific timeframe.

Is inflation a bad thing?

Many economists believe a certain degree of inflation is actually beneficial. It encourages consumers to spend and invest their money (thereby stimulating the economy) instead of hoarding cash.

Of course, when inflation spirals out of control, it can do more harm than good and leave many consumers incapable of affording essentials.

There are still people that profit in either scenario (controlled and excessive inflation), though. Let’s take a closer look.

Who benefits from inflation?

When inflation rises, companies with fixed-rate debt may be able to get ahead by increasing prices and using the additional income to repay lenders.

For example, imagine Corporation A takes out a $500,000 loan at an interest rate of 5%. Shortly after, inflation rises from 3% to 6%. This doesn’t change how much Corporation A owes its lenders. However, it does give Corporation A room to increase how much it charges for its products and services, thereby netting greater profits.

Individuals with fixed-rate low-interest debt (i.e. mortgages and car loans) may also benefit from inflation. Their loan terms will become advantageous in the event central bankers respond to inflation by raising interest rates.

For example, imagine Bob secured a 10-year fixed-rate mortgage charging 2% interest five years ago. Shortly after, inflation rises and governments respond by increasing interest rates. Hopeful homeowners entering the market might have to pay 4% or 5% interest while Bob enjoys his comparatively low-interest loan.

Since inflation typically entails rising prices for commodities such as gas and building materials, investors who own those assets stand to win big.

When inflation surges, many people (understandably) shy away from holding onto cash. Instead, they flock to assets they expect will appreciate and protect their money’s value.

Value stocks represent one such asset class that (according to Investopedia) performs well during periods of inflation.

Further, as The Balance reports, stocks poised particularly well for growth are those associated with companies that meet criteria such as:

As I mentioned earlier, rising real estate valuations are typically a hallmark of inflation. This places real estate investors in a position to profit by increasing rents or selling properties for a significant profit.

Companies operating in competitive sectors may be forced to pay higher wages to attract workers. Consequently, qualifying workers may be able to secure big raises that outpace inflation.

This can be particularly beneficial to workers that have fixed-rate low-interest debt or invest in assets that tend to rise with inflation.

Who loses due to inflation?

Of course, while some people profit from inflation, many others suffer. That includes people in the following categories.

People who keep their life savings in traditional savings accounts

This is especially devastating for people in countries experiencing hyperinflation (typically defined as inflation exceeding 50% or more per month). At those inflation rates, life savings kept in cash could be wiped out within a matter of days.

When living costs rise due to inflation but a worker’s wages remain frozen, they are, for all intents and purposes, earning less. Take someone earning $100,000 per year when inflation hits 10%. If they don’t receive a raise, their $100,000 will only buy $90,000 worth of goods based on last year’s value.

If central bankers respond to high inflation by increasing interest rates, consumers with variable interest rates will be forced to pay higher borrowing costs. This can amount to significant money lost on big purchases such as houses where even small interest rate increases equal tens of thousands of dollars in additional payments.

Rising interest rates may even prevent some people from being able to afford their homes anymore.

If inflation rises particularly fast in one country, companies operating within it may see themselves become significantly less competitive on the world stage. They’ll be forced to raise their prices by a larger margin than companies in other countries, making their goods and services less attractive.

Should you change your financial strategy in response to inflation?

Naturally, after reading this article, you may be wondering whether it makes sense to adjust your personal financial strategy in response to (or in preparation for) high inflation. Here’s some food for thought in that regard.

Inflation impacts everyone differently. Your action plan will differ depending on factors such as how close you are to retirement, your profession, your risk tolerance, and more. Consequently, you’d benefit from tailored financial advice when it comes to planning for inflation (or any other economic trend).

Maintain a diversified portfolio of assets

Some assets perform well during periods of high inflation while others perform well when inflation is low. You don’t have to bounce back and forth between these assets based on economic conditions. In fact, doing so would be market timing, which is a terrible way to invest.

Instead, consider building a diversified portfolio that will weather various economic conditions. Click here to check out my article about portfolio diversification.

Find the right mix of cash savings and investments

Just because cash loses value rapidly during periods of high inflation doesn’t mean you shouldn’t hold onto it. Cash in an emergency fund remains liquid and may keep you from having to sell investments at an inopportune time.

For more context, check out my article about saving vs. investing.