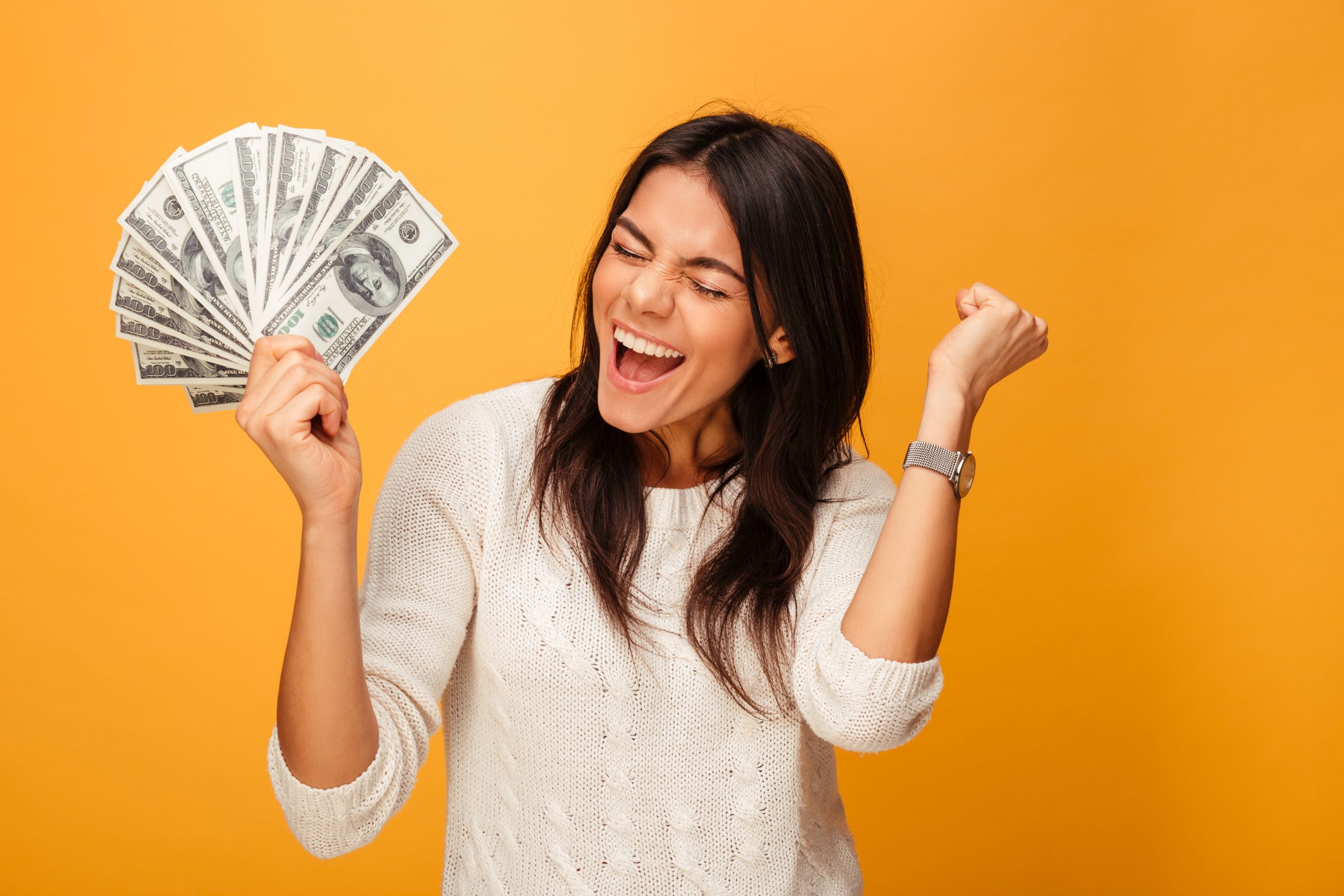 Wondering how to make money without a job? Whether you’re looking to supplement your traditional income or replace it altogether, keep reading as I share some helpful strategies.

In this article show
How to make money without a job: 20 strategies
1. Build a significant asset portfolio
2. Sell digital products
3. Become a blogger
4. Sell homemade goods on Etsy
5. Flip used items for profit
6. Start an online agency
7. Freelance
8. Build and monetize an online brand
9. Rent out your home (or even part of it)
10. Get paid to test websites
11. Participate in skill-based competitions
12. Rent your car out
13. Rent your parking space out
14. Fill out paid surveys
15. Amazon Kindle Direct Publishing (KDP)
16. Rent out party items
17. House sit
18. Babysit
19. Start an e-commerce site
20. Become a tutor

How to make money without a job: 20 strategies

If your goal is to generate passive income, it’s hard to beat asset ownership. Stocks and similar investments rise in value with no effort on your part. You just need to add money consistently and let compound growth do the rest.

If you start early and stay consistent, your portfolio will eventually produce enough growth in an average year to support your lifestyle. The wild part? Getting to this point requires less money than you probably think. Check out this article I wrote breaking down the math and showing you how much money the average person actually needs to never work again.

Traditional employment entails exchanging a finite resource (your time) for money. The problem? There are only so many hours in a day. There are also hard limits on what companies are willing to pay for your services. These factors make traditional employment difficult to scale if you’d like to eventually earn lots of money even when you aren’t actively working.

Enter the concept of creating a digital product and selling it online.

This strategy is highly scalable because you never need to worry about inventory. As long as there are people willing to buy your product, it’ll make you money. You could be on a beach, laying in bed, or doing whatever else you wanted while still getting paid.

Popular types of digital products include:

If you approach blogging the right way, it can be a great means of earning money passively while writing about interesting topics.

That’s true – but only because most bloggers don’t write with readers in mind. They pull topics out of a hat then write rambling articles that don’t deliver much value but rather serve as opportunities for them to vent.

A much better approach would be to conduct research using tools such as Google Keyword Planner to identify topics people care about. Then, see what articles appear on the first page of Google for those topics and write content that competes with them.

You’d be surprised how quickly your blog traffic grows when you follow this formula. Once you have a consistent stream of visitors, you can monetize using a variety of strategies, such as:

If you love making things at home, why not monetize that hobby by selling goods on Etsy? One of my friends earns a really solid side income selling 3D printed Labyrinth Door Knockers this way.

Other popular types of items on Etsy (according to CED Commerce) include:

Many people selling used items online (i.e. on Facebook Marketplace, eBay, etc) aren’t doing so with the intention of turning a profit. They’re just trading old junk for whatever money they can get.

But as the old adage goes, one man’s trash is another man’s treasure. If you can buy those used items for less than market value, you can turn around and flip them for profit. Even a relatively small profit can add up if you’re selling hundreds of items every year.

The key is to account for additional costs you’ll incur in the process of flipping (i.e. shipping). Otherwise, you may find it difficult to turn a profit at all.

Companies of all sizes and in a wide variety of niches regularly outsource work. Agency owners take on those projects and subcontract the day-to-day work out to freelancers.

I list this among strategies for making money without a job because being an agency owner offers significant freedom compared with traditional employment. It can also pay enough that you’d be able to take time off in between contracts.

Because I have seven years of experience working at marketing agencies, though, I’ll preface all of this by saying you need to be really good at managing people (including not only your team but also clients and their expectations) for this to work. Otherwise, running an agency will be incredibly stressful – and likely not profitable.

If you like the flexibility of contract work but hate the concept of running your own agency, freelancing might be the right choice.

We live in an increasingly modularized world. Everything from website copy to graphics and full-stack applications are created by freelancers these days. If you plan your schedule wisely and can charge high enough prices (which becomes easier as your portfolio grows), you’ll have the luxury of being able to choose when and how you work.

8. Build and monetize an online brand

Popular social media accounts can be more profitable than you might think. According to CNBC, social media influencers can earn well into the six figures. This doesn’t require millions of followers, either; some social media networks are lucrative for people with as few as 1,000 followers.

It all comes down to choosing the right niche and building a brand within it strategically. When you’re ready to monetize, you can do so through affiliate links and sponsored posts.

Another way to make money without a job involves renting out your home whenever you aren’t using it (i.e. when you’re on vacation). On platforms like Airbnb, you might be able to earn upwards of $100 per month (according to AllTheRooms), which isn’t bad at all.

If you aren’t on vacation often enough for that income to be significant, you could rent out part of your home (i.e. the basement or a spare bedroom) throughout the year. That could net you thousands of dollars per month.

10. Get paid to test websites

Platforms such as UserTesting will pay you for feedback on your experience using various applications and websites. Tests on UserTesting will net you anywhere from $4 to $120 depending on the circumstances.

A similar strategy for making money without a job would be beta testing software. Sites like test IO connect beta testers with companies looking to find and squash bugs in their applications.

According to TechCrunch, hackathons are an increasingly lucrative source of income for competitive computer programmers. One programmer writing on Medium claims to have earned more than $150,000 via hackathons. Indeed, some hackathons pay winners tens of thousands of dollars.

If programming isn’t your jam, there may be other skill-based competitions you could participate in for prize money. From art to gaming, look hard enough and you’ll likely find something.

Websites like Turo make it possible to rent your vehicle out on a peer-to-peer basis. It doesn’t have to be a luxury vehicle, either; a quick search in my area reveals people renting their Toyotas out for upwards of $40 per day.

Sure, that won’t make you rich. But if you’ve got a car sitting in the garage or driveway, why not turn it into a passive income stream?

13. Rent your parking space out

Depending on where you live, there may be people willing to pay for usage of your driveway or parking spot. In Toronto, for example, Parking Cupid suggests people are earning an average of $145 per month from these listings. It’s not life-changing money but it’s something!

There are tons of paid survey sites around, including:

The challenge with many of these websites, though, is that they require lots of effort and don’t pay very much. Still, though, if you have time to burn and enjoy helping companies understand the market, it can be fun.

You can self-publish eBooks fairly easily through Amazon’s KDP program. If you choose your topics wisely and package the books well enough, it could be a great way to earn money without a job.

If this interests you, I’d recommend following Matt Rumancik on Twitter. He shares some great resources for turning Amazon KDP into a profitable side hustle.

Years ago, I met a guy who made really solid money renting out bouncy castles for large parties.

It’s an especially interesting side hustle because high-quality bouncy castles aren’t that expensive. For a few thousand dollars down, you could be earning between $140 and $280 for six-hour blocks, according to Fash.com. You should be able to pay for the bouncy castle and start earning a profit fairly quickly.

Other party items you could buy and rent out include chairs, tables, tents, etc.

How sweet would it be to get paid for hanging out in a nice house all day? Well, that’s actually a thing!

According to a New York Times article, most people who pay for house sitting do so because they’d rather leave pets at home while traveling. Many people also appreciate knowing their home is being looked after while they travel.

According to HouseSitter.com, you can typically earn between $25 and $45 per day as a house sitter. That isn’t a ton of money but keep in mind, there’s nothing stopping you from earning money online while house sitting.

If you’re good with children, babysitting can be a great strategy for making money without a job. According to UrbanSitter’s 2020 National Childcare Rate Survey, babysitters charge an average of $17.73 per hour for one child all the way up to $21.41 for three children.

Platforms such as Shopify have made it remarkably easy to set up your own e-commerce site. You don’t even need to stock and ship products yourself; dropshipping services will handle fulfillment as soon as a customer checks out. This makes e-commerce a very low-risk means of making money without a job.

If you’re an expert in a particular subject, why not capitalize on that knowledge and become a tutor? According to Tutors.com, private tutors charge between $25 and $80 per hour. Tutors that prepare students for specific standardized tests (i.e. SATs) often charge more.